I bought this car in 2003 as a daily driver and started modifying by making it as comfortable to ride in as possible. I started by upgrading the audio system. The car already came with 8 speakers so I just built in the pioneer MPB headunit, which has the same colors as the interior lighting and added an JBL Amplifier and Subwoofer. I had heard this similar setup at a friend’s car and it sounded great. In my car the result is beyond expectations. Up next were tinted windows. First I had them tinted all around, but after a few situations in dark and rainy weather I took of the foil of the front windows. A friend of the guy who tinted the windows had some 7.5 x 17” ET35 x 100 Mille miglia Porsche cup 1 wheels lying around which came from his corrado and I could get them for a nice price. These replaced the 7,5 x 16” ET30 OZ Exclusive’s. Things started to look better. I drove around for a while with lexus style rear clusters but these soon had to be replaced by highline ones. Next thing on the list was handling. I went to the Essen motorshow to look around for some lowering solution. Koni had a nice offer for their 1130 sportkit so I decided to go for one of the best lowering solutions around. This kit lowers the car about 40 mm all around.  This was the way the car stayed for a while but I kept the need to make some more modificiations so I did some small things like a HID conversion and raid instruments. I always felt like the wheel were just a bit too small for the Mk4 so that had to be sorted. After looking at different examples of 18s on Mk4 I decided the classic Y spoke still suited the car the best. I ordered 18” Kato Sukumo’s with matt black centres and that’s probably the last modification I did. The car behaved really well for all these years and I only had a few problems in the period where the guarantee was still valid from the company where I bought it. 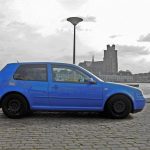 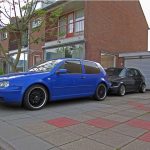 Future plans:
There’s enough room for improvement, but I’ll focus on my bay window and mk1 cabriolet. I’ll just do the things that are needed and regular maintenance and keep it in my possession as long as possible.