I bought this car in 2008 through my neighbour who works at the fiat dealer. Someone had exchanged this car for a fiat. I bought it with the idea of driving in it for may be a year and move on to another car, but like Dick Dale sang: “it will grow on you”. When I bought it the car was completely original, but it had a respray and a recently replaced vinyl roof. The first thing on the least was cleaning, much cleaning. First I went over the outside with meguiars shampoo, clay, scratch remover and wax. After two days it looked show worthy but then there was still the interior. Together with my friend Arend it took another day to make the interior look like how it came from the factory again. Then I had to sort out missing and damaged parts like for example replace the cracked glove box for a complete one and replace the headlights by original hella’s because one of them had also a crack in it. With these problems out of the way I could really get to work. I started by getting the ride height sorted. I went to the Essen Motorshow looking for quality coilovers on a budget. The choice was AP coilovers, which looked really great. When they arrived the first thing I noticed they were also nicely packed. Together with Arend again I installed the coilovers and what a result. This kit really is great. After that I went on with subtle modifications like polished side trim and doorhandle inlays. Smoked front indicators and rear clusters. First MOT was a bit of a pain with the car not able to get on the ramp and failure of the painted rear clusters I got cheap of ebay. So these had to be replaced for original Fifft items. Now the car was looking good except for the wheels, which normally make the car. First I looked into budget wheel which I hadn’t seen before, but then I came across some 15″ rials for a bargain, but unfortunately these didn’t fit over the standard calipers. Then I decided to blow the budget by refurbishing some all time classic BBS RM’s. I bought them for a nice price because some previous owner had painted them with a spray can including the rims! First I made an attempt to get the paint of myself, but this was so terrible that later on I had them sandblasted. I painted them together with my brother in law Rutger in his old barn and the result was great. 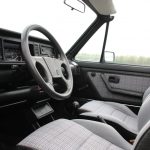 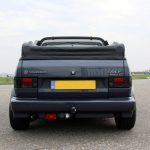 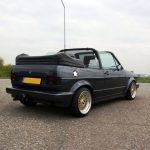 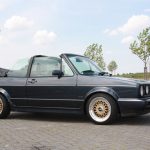 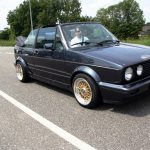 Future plans:
I have a crème leather interior which has to get sorted and BBS steering wheel both waiting to get installed.